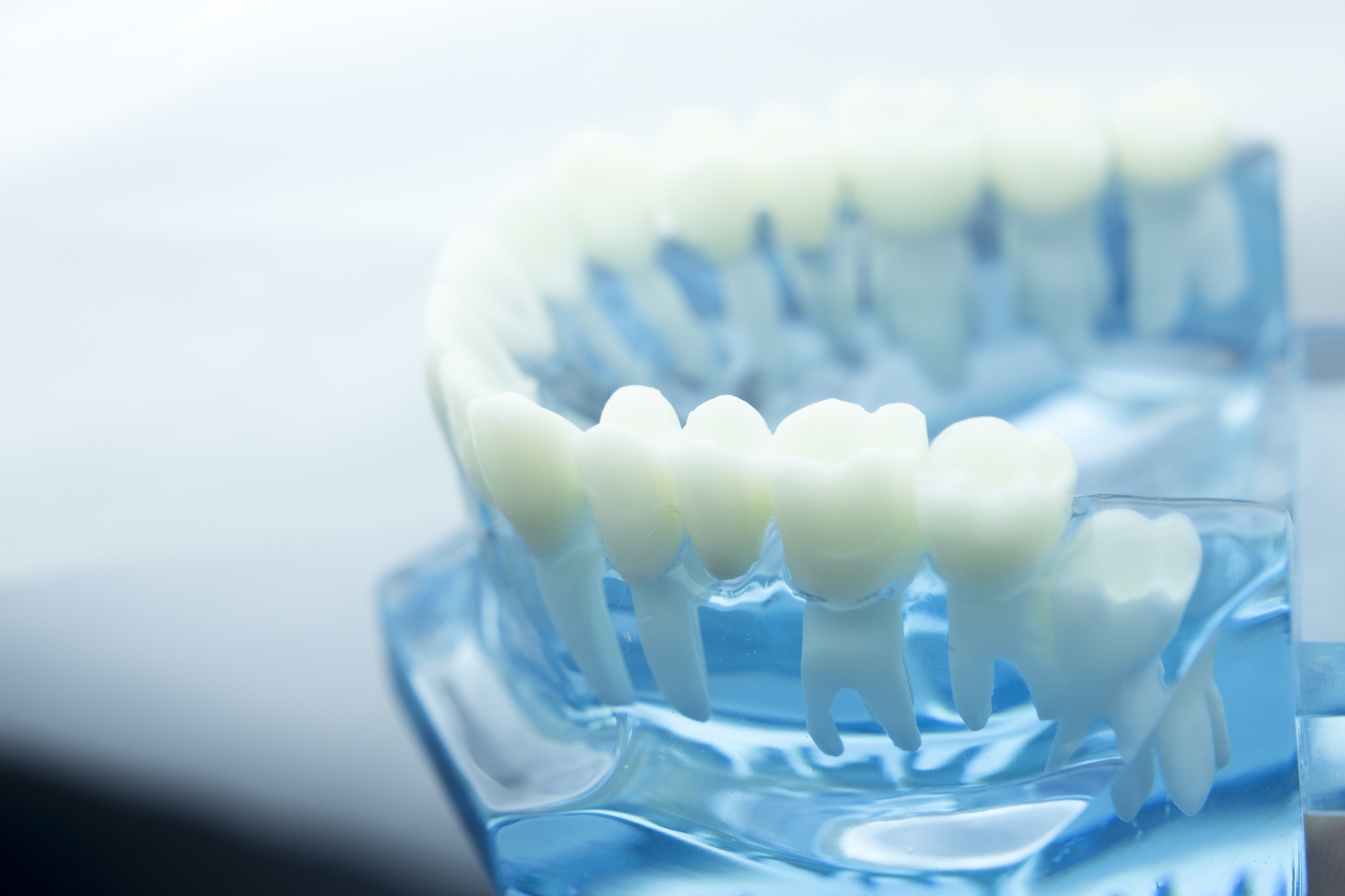 The adult human dentition consists of 32 teeth divided into four different types of teeth. Each of these types have a different look and function. However, they are all built up the same: top crown, bottom root and both surrounded by dentin and enamel.

Anatomy of the teeth

Roughly, every tooth whether incisor, canine or molar can be divided into two parts:

The short transition between the tooth crown and the tooth root is colloquially called the cervix (cervix dentis). This refers to the part of the tooth that is not firmly anchored in the jawbone, but is also not visible from the outside, as it is covered by the gums.

The enamel is the outermost layer of the tooth crown. As it is exposed to a great deal of pressure during daily comminution, it is the hardest substance in the human body. The enamel serves the underlying dentin as protection against abrasion, decalcification by acids from food, temperature fluctuations and bacterial infestation.

The harder the enamel, the better it can fulfill his task. The hardness is determined by its mineral content. The more calcium phosphate and fluorine present, the more resistant the tooth is to external attack.

95 percent of the enamel consists of hydroxyapatite, a crystalline material that mainly consists of calcium and phosphate. It makes the enamel permeable to water-soluble substances such as its own components calcium and phosphate, but also allows the passage of other substances such as fluoride. With the help of this fluoride, the hydroxyapatite is converted into the much harder fluorapatite. Because of this property, fluorine is one of the most important trace elements for optimal dental health and is used to harden tooth enamel in toothpastes.

Acids, on the other hand, damage the tooth, as they dissolve both calcium and phosphate from the hydroxyapatite and thus soften the enamel.

Just below the enamel lies the dentin, which is the largest part of the tooth. Two-thirds of the dentin is just like the enamel composed of calcium and phosphate, and one third is made up of water and protein in the odontoblasts (dentin-forming cells) and their processes (dentin tubules). The dentin is still harder than normal human bones due to its structure, but softer than enamel due to the incorporation of organic substances and therefore more prone to tooth decay.

The dentin is also very sensitive to pain: heat, cold and touch lead to the smallest fluid movements in the dentinal tubules, which can range in the area of ​​the cervix from the pulp to the tooth surface. If the neck of the tooth is free, there is a direct connection with the free nerve endings in the dental pulp via the dentinal tubules, which immediately pass on an external stimulus as a sensation of pain to the central nervous system.

The dentin encloses the tooth cavity in which the pulp is found. It is permeated with

and thus provides the tooth with nutrients.

Around the root area, the dentin is covered by a thin layer of cementum (also known as dental cement). This root cement forms the outer end of the tooth root and firmly anchors the tooth in the jaw. A certain elasticity in the tooth compartment preserves the tooth, so that it can withstand minor shocks and high pressure without damage.

Humans have two sets of natural teeth throughout their life: the deciduous teeth and the permanent teeth. Both types of dentition are created in the human jaw before birth. Until the very last tooth, usually a wisdom tooth, the teeth take up to 25 years to be actually "grown".

Between the sixth and eighth week of pregnancy, the development of the teeth usually begins the with the formation of the tooth ridges, which in the following weeks form the attachments for the first 20 deciduous teeth and the subsequent 32 permanent teeth.

Approximately in the fourth month of pregnancy, the hard substance of the deciduous teeth begin to mineralize, ie, small, soft nuclei form the first, hard baby teeth, which are still hidden in the jaw.

The first deciduous teeth show up most between the sixth and eighth month of life of the child. First, the middle lower incisors break through, a little later the upper ones. Between the eighth and twelfth month of life follow the lateral incisors, usually first below, then shortly thereafter above. From the first year of life the first front molars follow, with about 15 to 20 months close the canines then the front part of the deciduous dentition. By the age of three, the deciduous dentition is usually complete.

From the age of six, the first permanent teeth break through. First, the large molar tooth breaks through behind the molar teeth. The large molar is the first of the 32 permanent teeth, which settles in the child's teeth, without displacing an existing baby tooth. The actual change of teeth usually begins about a year after the appearance of the first permanent molar tooth. Gradually, the roots of the deciduous teeth dissolve to make room for their successors in the dentition.

Even now, the central incisors are again the first to be replaced by their permanent successors. This happens mostly by the arrival of the school age, ie about the age of six and seven years. This is followed by the lateral incisors before the first premolars in the lower jaw fall at the age of about nine or ten years. Shortly after, the front molars follow in the upper jaw. Around the age of eleven, the molars then follow the canines in front of them and the remaining molar teeth. At the age of about twelve, the entire deciduous dentition is usually been lost, but it will take another two to three years before the permanent teeth are completely broken through.

As a parent, however, you should'nt worry if these times are undershot, ie deciduous teeth fall earlier than mentioned or permanent teeth break through earlier. The mentioned sequence of deciduous tooth loss or breaking through of the permanent tooth can also be individually different in a child. However, if these regular times are significantly exceeded and the deciduous teeth do not fall out or permanent teeth do not break through, you should let a dentist clarify the condition. It is possible that teeth are crooked in the jaw and are therefore obstructed by other teeth and can not break through at their intended location.

The following table gives rough indications of the break-through times of permanent teeth (not the falling out of deciduous teeth, because times do not always overlap).

The permanent dentition of an adult human, including all wisdom teeth, consists of 32 teeth, 16 in the upper jaw and 16 in the lower jaw. The shape and function of the individual teeth have been shaped since the deciduous dentition and are quite different.

The four flat incisors (numbered in orange), the so-called Incisivi, are placed in front of both the upper and lower jaw. Their thin, lower edges serve to bite off the food during eating.

To the right and left of the incisors are the canines (dens caninus, green). Canines have the longest roots of all human teeth, so they are firmly anchored in the teeth. This makes the canine very robust. For this very reason and because of the pointed shape, the canine can hold food very well and tear it off.

Right next to the canines two small molars (purple), the so-called premolars, are located. Their upper surface (the chewing surface) is provided with small elevations and hollows that capture and crush the food.

At the back next to the small molars are two molars (blue), the large molars. Colloquially, they are called molars, because they are able to literally grind the food by size, location and texture. In contrast to the small molars, they have larger roots and are thus better anchored in the jaw.

Immediately behind the large molars, there may be a wisdom tooth on each side, both above and below. However, not every person's wisdom teeth break through. 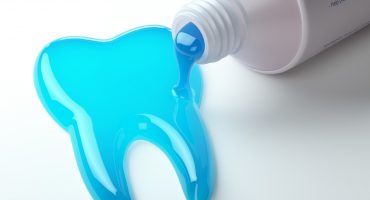 Fluoridation is one of the most important methods of caries prophylaxis. It lowers the acids produced by caries bacteria in the mouth. Learn more! 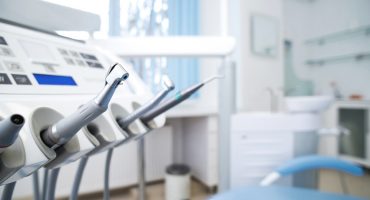 In the area of ​​supplemental dentistry, the oral irrigator nowadays occupies a permanent place in oral hygiene in more and more households. 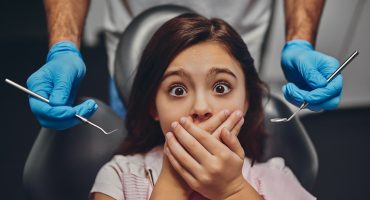 In Germany alone, one in five people are afraid of visiting the dentist, and not just of major surgery. Before each appointment, this uncomfortable feeling spreads, sometimes severely and with significant side effects. Where this fear comes from, what helps and what you can do about it, we have collected for you.